Some guy’s head pops off.

I’m okay with this, I tell myself. This is okay. Everything’s okay—

Now the woman that did it is turning my way, her green eyes glowing in head-popping glee.

“Screw that noise!” I scream, politely informing every monster in my area just where I’m at.

When I came to Boston, I had planned on a calming, relaxing evening at a Dropkick Murphys concert. I didn’t expect to be running through seedy alleys being chased by demon possessed Bostonians!

Another one drops in front of me, blocking me off. I slink against the wall, closing my eyes, ready to die…then feel the knob. A door! Soon I’m inside a building that seems to be in competition with the alley for the “Seediest Place in the City” award.

It’s a bar, and there are people everywhere, all mostly keeping to themselves. The hardwood floors are splotched and stained with dried blood spatters. Shattered glass crunches under my steps as I move through the smoky, dimly lit air. It reminds me of my childhood home. Good times.

Sliding up to the bar, I ask the pallid fellow on the other end where I’m at.

“Garrison’s,” he says, his heavy eyes clearly annoyed. “Want something?”

He shakes his head and walks away.

“This is a pretty rough neighborhood,” I say to the guy next to me.

He’s quietly leaning over his drink, his long, dark hair obstructing his eyes. He says, “You have no idea.”

I knew right away he could be trusted, so I extended a hand and introduced myself.

“Patrick Donovan,” he says back.

I gasp! Patrick Donovan, author of the novel, Demon Jack (Fable Press) is sitting next to me! I realize immediately that this is a great opportunity to kill some time. Maybe the beasts outside would tire of my absence, and then I could quietly slip away.

“Well, Mr. Donovan, this is your lucky day! I’m here to interview you about your new novel.”

He regards me for a moment, and then gives a quiet smirk. “Okay, sure.”

That’s when I say:

Thanks for taking the time to sit here with me. It’s in no way a cover for me to hide from the evil, creeping just outside. So, let’s get started with the usual suspects: What is it about writing that draws you to the craft? What does it do for you, and what got you into it?

Honestly, it’s because there’s just not enough magic in the world man. See, that’s the thing, I’m not in this for the money, or the women, or anything glamorous like that. Ok, maybe a little part of me is in it for the convention girls dressed like Twi’leks, but I digress. Honestly, I just want to be able to give that poor guy or gal that’s having a bad day a little bit of an escape. I want to give them the chance to sit back, kill a few hours, and experience a world where there is a little more magic, where the good guy eventually wins, gets the girl, that kind of thing. As far as what got me into it, truth, I’ve always been in it. I was drawing stories in crayon before I could write.

What is your writing process like? Do you have a ritual or habit, or is it more spontaneous? I mean, aside from the booze and creepy bars.

I usually write late night, chugging coffee with a pipe hanging out of the side of my mouth. On more than one occasion there’s been known to be various form of 80’s pop metal blasting from my speakers. The main thing is that I always try to set a goal for myself, be it edit a chapter, write two thousand words, whatever and then I absolutely refuse to sleep until I hit said goal.

Honestly, I just want to be able to give that poor guy or gal that’s having a bad day a little bit of an escape.

Tell me about your novel Demon Jack.

On the surface Jack is sort of my action movie. There’s a lot of violence, a lot of high stress situations, that sort of thing. That said though, it’s also the first book in what I hope turns out to be a series so there’s a lot of groundwork being laid here to unravel later. As a series, there’s a lot of hope there, a lot of broken people going for some form of redemption, whether they know it or not.

Demon Jack deals with demons and possession, and they have certainly had their place in popular fiction. What is it about this subject matter that pulls you in?

You know, I’ve never really thought about it. If I had to say though, it comes down to two things. The first, there’s something I think that’s just damned frightening about something taking you over, forcing you to do things you don’t want to do, and leaving you inside your own head enough that you’re watching all these things you’re doing without being able to stop yourself. That’s number one, number two, I guess in a way it’s sort of metaphorical. Not to get into the nuts and bolts English 101 stuff here, but looking back I suppose you could say it’s sort of a metaphor for addiction, wherein something has that sort of control over you and Jack being a former heroin addict is always going to be fighting that.

Granted, my vampires are a far cry from the stereotype.

Wait, you’re not possessed by demons, are you?

Both lovely ladies, I’m sure. Moving on: Word on the street is you have plans for sequels. Any news on that? Do you plan to extend Demon Jack into a series?

I hope too, but there’s nothing set in stone. I’ve got an overarching story arc in mind though.

Do you have any other projects in the works, or planned for the long term, outside of the Demon Jack universe?

Yes and no. I just finished a rough draft, that I’m editing currently that takes place in Jack’s world, but it’s told by a completely different character that has a completely different point of view. He’s a Shaman, or my take on a Shaman rather. Where Jack sees the world as a very tangible, physical thing. Jonah, the main character in this new series, has a completely different perspective. He doesn’t just see, for example, the drug addict. He sees the addict and the spirit of addiction that’s causing him to use heroin, despite how badly he wants to quit or where Jack would beat someone about the head and neck to get information, Jonah will just talk to the spirit of a stop sign or something else. It’s really been a lot of fun to write though, and while it’s still dark in places, it’s a lot more light-hearted at times than Jack too.

Demon Jack has a vampire antagonist, so I have to ask: Vampires, do they A) Glitter in the sunlight, B) Burst into a pool of chunky blood in sunlight, or C) Go into politics?

They sorta turn to ashy grease stains mostly. Granted, my vampires are a far cry from the stereotype. There’s no sparkling, no swooning over barmaids. They’re more like Great White Sharks who can think and plan, which when you think about it is just a little on the frightening side.

What I mean is, write crap. Write total crap and don’t delete it. Leave it there, let it stink up your hard drive. After the smell’s seeped into just about everything, sit down and edit it into pure gold.

Who or what are some of your biggest influences?

Jim Butcher, author of the Dresden Files, is definitely up there. I’m a huge fan of the “conversational” tone in the Dresden Files. You really feel like while you’re reading them, that Harry Dresden is telling you the story over a beer. Stephen King is another big one. Let’s see, Richard Kadrey, Jennifer Estep, Kevin Hearne and then there’s the usual suspects, folks like Sir Arthur Conan Doyle, Lovecraft, and Poe.

Do you have any advice for aspiring authors?

Three things. One, toughen up soldier. Seriously, you’re going to be rejected. It’s a part of the game. It’s not a matter of if, it’s a matter of when. That said, look at it like this: You get 50, 60, 100 rejection letters, that’s only a small fraction of the total number of people who read in your genre. There are hundreds, maybe thousands more out there that are gonna love what you put down on paper. Two, work a service industry job. Deliver food, wait tables, something that puts you in contact with people. You’d be absolutely amazed at the wealth of ideas you’ll find falling into your lap. Finally, no one cares about what you write down on that sheet of paper or type on that screen. They care about what you leave there. What I mean is, write crap. Write total crap and don’t delete it. Leave it there, let it stink up your hard drive. After the smell’s seeped into just about everything, sit down and edit it into pure gold.

Okay, I think that’s been long enough. Er, I mean, that about covers all the questions! Just one more though, before I go: Any suggestions on how to handle green eyed fellas outside?

Yeah, find the guy in the hooded sweatshirt with all the scars on his face, tell him you’ll buy him a six pack if he can give you a hand.

You mean that creepy dude in the corner? I…er…think I might stand a better chance with this battle axe that just appeared in my hands for no apparent reason. (Deus ex machina for the win!)

Thanks again for giving me the chance to learn more about your novel. And to the readers, you can follow Patrick on Facebook and Twitter, and be sure to check out Demon Jack, available now in print and for Kindle through Fable Press. 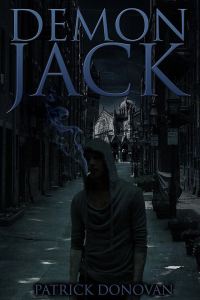